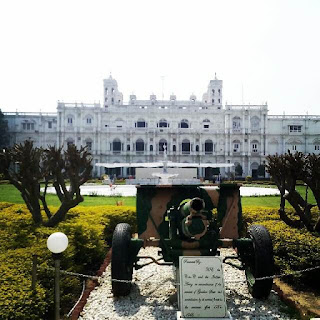 I roamed through gullies and bazaars, basking in the pleasant winter sun, to find the best eateries in this underrated city of royalty, history and some really good food.

I was prancing down Phalka Bazaar with an exploratory insouciance, on the lookout for the famous Ratlam Namkeenwale near Kailash Talkies, when I passed by a large, bright shop with a colourful display of Pethas. I stopped in my tracks. The name - Panchhiraj seemed familiar, perhaps an offshoot from the Panchhi Pethas of Agra - said to be one of the finest purveyors of these sugar-dipped ash gourd sweets? I stepped in.

The origin of the petha is often linked to the Mughals; suspiciously wild accounts trace back the petha to either, the royal kitchen of Shah Jahan who the ordered the formulation of a novel sweetmeat to motivate and energize his army of Taj Mahal masons, or, to the court of Jahangir who is said to have been besotted by the sweet elegance of Nur Jahan and her offering of pethas.


My eyes lit up on seeing huge glass jars filled with glistening, syrupy pethas in a great assortment of colours and flavours. Then there were pyramids of dry pethas in as many varieties. Panchhiraj had everything - from coconut crusted strawberry pethas, to glistening parrot-green Angoori ones, and renditions of colourful melons and plump oranges made from the sweetmeat. Truly, an 'Amit and the Petha Factory' moment.

I was particularly enamoured by a Paan shaped petha called Petha Gilori. A thin sheet of paan-flavored petha, encased a minty paan masala and gulkand mix. A single clove sealed the deal. These guys had nailed the masala. The experience of biting into it, through the paan flavoured gulkand and taut, but not cloying petha sheet remains one of my most memorable food experiences in Gwalior.

Back on the road, I stayed on course towards Maharaja Baada. Upon reaching a fork, I was about to pop out Google Maps when I spotted a small crowd outside a shop. When it comes to street food, a large crowd usually denotes good fare. This was Hemu's Cheela Shop.

I tussled my way to the counter where I spotted a large, framed picture of Hemu with Chef Sanjeev Kapoor. I promptly asked for a plate. Cheelas are like Besan (gramflour) Dosa/Crepes. I first came across them outside Chandni Chowk Metro station in Delhi. Those were like the smaller, thicker Kal Dosa or the Bengali/Oriya Pithas. Stuffed with paneer and laden with chutneys, they made for a fairly filling snack.The ones at Hemu were crisp and thin like a Paper Dosa. He grated in some paneer, Amul cheese and sprinkled a dash of masala. Catching me clicking pictures, he informed me that his establishment is quite well known and they even have a Facebook page.

Hemu also guided me to Kailash talkies and the famed Namkeen shop. I walked through an old Sabji-Mandi shortcut, amidst cows snacking on the remainder of the days greens, to spot MM Namkeen, Ratlamwale.

Ratlam is an important junction on the Indian Railways network, I remember it being a halt on the Bombay-Delhi Rajdhani train. It's also well known for it's Sev, is much spicier and thicker than other versions.


MM Namkeen too had a bustling crowd, vouching for it's reputation. I asked the moustachioed owner about the store's speciality. He piped back - 'medium spicy ya full spicy?', I said medium spicy and he pointed to the stack of thick Ratlami Sev on the shelves. I picked up a couple of packets to take back home. The Sev had a gritty crunch, inflicting an additive pain-pleasure mouthfeel.

On a sunny afternoon, I sauntered through the serene tree-lined avenues and gardens of Amma ki Chhatri in Lashkar, which bore a pleasant resemblance to the roads of Lutyens Delhi, where I grew up. I made my way to Jodhpur Misthtaan Bhandaar, after having received many recommendations for their Kachori.

Indeed, the kachori had a shatteringly crisp crust and a moreish filling of potatoes and onions. I made a small well in the centre and filled it with the tart Imli Chutney. All thoughts about the Carb-free diets of the world were forgotten!


I followed it up with a fantastic cup of thick and creamy Rabri, studded with pistachio and almond slivers. I noticed an unusually burly Jalebi on the counter, called Paneer Jalebi. Much thicker than an average Jalebi with gracefully ridged curves, it was not dripping with syrup. It had a spongy texture capped by bits of crystallised sugar for a subtle crunch. I later found that about the Bengali version of the sweet called Chhena Jiliebi. I wonder if the enterprising Marwari community of Rajasthan brought this recipe eastwards with them?


I posed the question on twitter to food writer Kalyan Karmarkar. Kalyan, a Calcutta boy, told me about the Chhenar Jilibi of Calcutta and Mawa Jalebi he's seen in Bombay, though neither seemed to look like the Paneer Jalebi here.

You cannot possibly leave Gwalior without taking back some Morena Gajak, one of Chambal's most celebrated offerings. Gajak is best described as a teel (sesame) and gur (jaggery) candy and is a popular winter time sweet in North India. It comes in three major textural varieties - brittle (which is similar to peanut laden chikki), flaky and fudgy. The neighbouring district of Morena claims to be Gajak Capital of India, water from River Chambal allegedly imparts a matchless taste to Gajak made in this part of the world. I think it’s more about the tradition and artisans skill - the laborious, skillfull task of repeatedly pulling, stretching and hammering the life out a hot tar of gur, teel and ghee.

The hard and flaky variety stay fresh for upto a month. The fudgy ones are best consumed within the week. In any case, do not refrigerate, as it ruins the texture.After much gajak eating and recommendations from local enthusiasts, I'll put my money on the omnipresent Daulat Ram's Mashoor Gajak Bhandaar, who claims to be the city’s Gajak Lord. I wouldn't doubt, as it’s hard to not find a branch of Daulat Ram’s shop wherever you are in Gwalior.

Head to the largest one on Nayi Sadak, where it jostles for your attention amidst an entire street selling only gajak. They let you try out different varieties before buying. My favourite one is the pista studded fudgy (soft) gajak. As the beaming face of Mr. Daulat Ram on your box of Gajak assures, you can’t really go wrong with Gajak!

Reminiscent of Holi, I am not particularly fond of Gujiya - It's often dry and overloaded with mawa. My host, an LPG distributor in Mihona, insisted I try out one and sent for plates and napkins; not wanting to appear to hoity-toity, I simply picked up a gujiya and bit in.

As my teeth crashed through the crispy fried shell, a sudden burst of liquid spilled onto my shirt. Innocuously encased within the Gujiya was a pouch of syrup. My host sheepishly grinning, reached out to wipe off some my shirt.

Stained with the sticky sugar syrup, I would have been rather upset had I not been chomping down the rest of the Gujiya. With every bite, my mouth was filled with dry fruits and mawa swimming about in a sweet, but not cloying cardamom flavoured syrup. Almost like eating a sweet golgappa!

Of course it's not called Chashni-Bomb Gujiya, but then again I couldn't find any mention of it on the internet. Food writer Shirin Mehrotra tells me about her mum's version in which the sugar inside melts to create a gooey texture. Folks at Mihona just call it Gujiya, which is a shame. This little cracker packs in such a booming surprise!

Do take a stroll down Sarafa Bazaar, and walk up to Maharaja Baada to experience the quintessential Gwalior nightlife. This is an old school Indian market, from an era before shopping malls. There are many chaatwallas dotting the route, hawking the lambi Paani puris and Karela chaat, which I wrote about in my previous Gwalior post.


By far the most popular eatery is the grimy and lively Dilli Parathewala. The parathas are along the lines of Parathewali galli in Chandni chowk - stuffed to the seams and shallow fried in ghee. I am not too fond of this style of parathas, I like my grilled on tawa with a light stuffing. However, this place clearly has it's fans.

Gwalior isn't really the place if you're looking for unique, exceptional food in restaurants. However, if street food isn't your cup of tea, I recommend you check out the following:

1. Hakeems for Biryani - A Bhopali chain, they do a pretty good Mutton Handi Biryani.

2. Kwality for reliable Chhole Bhature: Walk into any Kwality across the country and you are assured of gigantic fluffy Bhatures and dark, piquant Pindi Chhole. Also try the Kulche with Chicken Bharta.


4. Volga for a mean mutton curry and naan.

5. Mansingh at DD Mall does nice Rajasthani thalis. Comparable to the Rajadhani chain of restaurants.

6. Silver Spoon at Usha Kiran Palace. THE place to show off in Gwalior.


Note: This is the second, and final, part of my guide to street food in Gwalior. You can read Part -1 here.