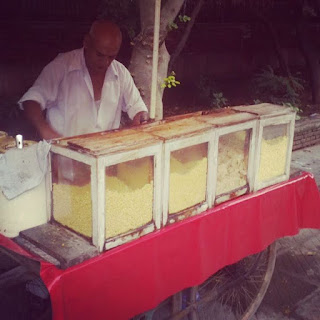 North Campus, Delhi University - look beyond the affordable cafes, cult college canteens and fast food chains teeming with students, and discover some of the legends of classic Delhi food in this part of town. Stalwarts of their craft, these guys have stood the test of time and fed generations of Dilliwallas; they would undoubtedly figure amongst the best places in the city for their food.

Any Delhite worth his salt has a favourite Chhole Bhature place; some swear by Sitaram in Paharganj, while others patronise Lala in Lajpat Nagar. I am an out and out Chache da fan.

A landmark in Kamla Nagar, Chache Di Hatti has been dishing out lip smacking, Rawalpindi style Chhole Bhature for over half a century. Come lunch time and a serpentine queue spills out on to the road, as hordes of locals, students and university staff descend upon the tiny eatery. Not a place to ponder over what to order, you grab a plate of Chhole, Hari Chutney, sliced onions and fresh-off-the-Kadhai Bhaturas and try to squeeze into one of the three standing tables.

The Pindi Chhole gravy, made sans tomato and onion is darkened with tea leaves, and endearingly coats the al dente chana that melts away in your mouth. Unlike the greasy, indistinguishable Chhole loaded with a generic masala powder that goes around these days, this one is mildly spiced with zesty Anaardana (Pomegranate seeds). I once saw the old Chacha step out of a Mercedes with a Degh full of Chhole at 7 am. In light of the recent news about Ghantewala shutting down, it’s heartening to find a tiny place like this prospering on account of consistently serving delicious, no-nonsense food for generations.

You soak up the Chhole with crisp and fluffy Bhature. I prefer the regular ones over the Alu stuffed Bhature, which can be a tad too heavy. Wash down your calorie guilt with a fizzy Banta (A desi lime soda) from the soda stand next door.

Professor Srivastava is a jovial fellow. After his first lecture of Thermodynamics, he got chatting about his student days in the University. I first heard about Bille when he mentioned this place he's been going to for over 40 years. I will remain eternally grateful to him for this trivia, more than all the laws of thermodynamics combined.

As you walk deeper inside Kamla Nagar, the showrooms and cafes give way to old Havelis, Masalchis and Dawakhanas, even as your nose prods you towards unmistakable aroma of Desi Ghee from a Halwai ki Dukaan. Bille di Hatti, usually greets you with the dashing young Mr. Manchanda, the second-generation owner who is unusually well spoken for a Halwai.  Giving him company on the counter are stacks of Bille’s signature Dahi, set in shallow Kulhads (Clay pots).

Most residents come down to Bille to get their hands on the yogurt; nothing like the supermarket variety, it has a smooth and dense texture with an intensely milky taste. A hint of tartness cuts through the earthy taste of the Kulhads. Each pot is crowned with a silky thin layer of Malai, unlike like the goopy paste that is spooned into Lassi elsewhere. This crisp skin of fat with a bite to it really takes your Lassi to the next level.

Also not be me missed, is Bille’s Poori Chhole. The Chhole is a light Punjabi-style Chhole Masala, which plays second fiddle to the crisp and light Pooris. Laced with just a whisper of semolina and a special mirchi (chilli) masala, the addictive hing-spiked Achaar nudges you for endless repeats.
Come winter, and Bille doles out a mean Dal Halwa too, making for the most indulgent Poori-Halwa mornings.

Everything at Bille almost always runs out by 2 PM and there are only a handful of sit-down tables inside. My suggestion is to land here early for a hearty breakfast, that’ll keep you smiling for the rest of the day!

While there are dime-a-dozen Bhelpuriwallas in North Campus, one man stands out from the pack. Always dressed in a crisp white Kurta, Sethiji is as much a part of the campus folklore as his legendary bhelpuri. As the spring breaks over Delhi, you see a bunch of tense final year students huddled around him, venting out the miseries of the education system. I’ve watched him counsel heartburns and career dilemmas with a grandfather-like warmth. All while he messily whips up a plate of magical Bhelpuri.

He clumsily scoops in the puffed rice, namkeen, peanuts and the works into a large dish. A squeeze of lime, a dash of his signature chutneys and some more whipping. Voila! The magic lies in those chutneys, which he keeps in large ceramic jars. The fiery Hari Chutney teasingly stings your palate, making your mouth water while the honeyed sourness of the Meethi Chutney pacifies that pleasant burn just enough to make you crave another mouthful.

Sethiji usually sets shop near the ‘University Special’ bus Stop post lunch and sticks around till dark or while stocks last.