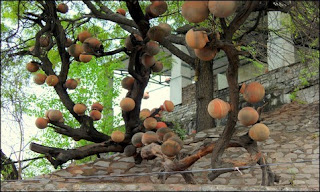 I attended by my first Hyderabad Write Club meet at Lamakaan last Saturday. HWC is an offshoot of the Bangalore Write Club, and follows the concept of bringing together established and aspiring writers to hone their skills.

Late by an hour, I joined in just as the half-a-dozen something group was beginning the writing exercise. It was centred around the theme of human senses. After a brief, but insightful conversation on the many human senses we take for granted everyday, we were given the challenge of writing a short story around one of them. A fishpot was passed around with a bunch of chits. Each chit was inscribed with a line to help us get started. I picked one which read, “I saw the pots”. Almost instantaneously, a nightmare unfolded in my mind and I penned a story extempore. Here’s what I wrote.


I saw the pots

I drove past the ramparts of the Old Fort. Fondly called Purana Qila, it predates it’s famous red cousin in the old city by a millennium. A fond memory from long ago stirred inside. I kept my eyes peeled for a Sufi Shrine along the road. After driving around the desolate gates of Pragati Maidan for a while,  I was about to back out of my quest. Just then, I saw the pots. I parked my car by the footpath and climbed up a weathered staircase. Pots upon pots hung from a giant Neem tree, at the aptly named Matka Peer. I walked past the Sufi dargah and into the adjacent room. I was here for devotion, just not the spiritual type.

The smell of saffron wafted out as I stepped inside the makeshift eatery. A familiar looking old man sat behind two huge deghs. Relief! I was back at Matka peer after half a decade, and was relieved to see their matchless biryani still around.  I excitedly asked for a plate of Biryani and Qorma. Mutton, of course.

“Pack ya Khaana Hai?” enquired the bearded old man. He was a kindly gent, I had often thought of making some small talk about what goes into his sublime food, but eventually shied away. Perhaps this time. “Khaana hai”, I blurted out. My mouth watered as he dished out his fare on a steel plate. I greedily asked for an extra piece of meat.

Every grain of rice shone with an amber meaty glow, emanating the unmistakable aroma of a saffron-spiked Biryani. The Qorma glistened with Ghee- the Ghee is what really sets Matka Peer’s Qorma apart.

I sat down on the plastic table and scooped up a spoon, almost closing my eyes in expectance. But I got nothing. Where’s that earthy flavour of the saffron? Another spoon, same result. It was almost like eating plain steamed rice, except that I didn’t taste any rice. I felt like I was chewing on grains of nothingness, my tongue blunt to any flavour. I put in a spoonful of Qorma, and felt the warm liquid in my mouth. But still nothing. I swirled it around like good wine, but I could only sense it’s warm fluidity and naught else.

Now panicking, I spotted a plate of sliced onions. Squeezing a wedge of lemon on a slice, I sprinkled some salt and bit into it. I didn’t taste the astringent onions, nor the sour lemons, not even the salt. The old man hollered, “Biryani Theek hai?”. Bewildered, I looked at him and almost let out a cry. A terrible realisation strangled my speech. I got up and rushed out of the shrine.

As I clambered down, I spotted a Cold drink Thela and bought a Minute Maid. Keeping my fingers crossed, I took a sip. Nothing. No sugar hit, no orangey tartness on my palate, just a flavourless cold liquid down my throat. I looked around, my eyes watery, searching for answers.

And then, I saw the pots.

Note: You can read more about the Hyderabad Write Club here - http://www.meetup.com/Write-Club-Bangalore/.