Welcome to the Chambal

It took me about 10 minutes to comprehend and, the rest of the day hence, to accept what I had just heard. I was about to be unceremoniously shipped off to Bhind, Madhya Pradesh on an official assignment.

I am usually game for taking a break from the monotony of my cubicle and exploring new cities but, this one was a bummer. Because, I was going to Bhind. Maybe if it was Mumbai, Delhi, Pune or pretty much any place I had heard good things about, I could overlook all the above points and be happy about it. But it was BHIND, of the Chambal Dacoits fame. Deserted, cold and dangerous, it fizzled the wanderlust out of me

Touchdown and Transformation
Fast forward one week, my initial despair had all but vanished. The gloom surrounding my well being was replaced by the bubbly excitement of exploring the region's history and cuisine. I had underestimated my esprit d'aventure.

Soon, I was whizzing past yellow mustard fields through bone-chilling cold on the National Highway 92. Best known as home ground to the legendary dacoits of yore, including Phulan Devi and Paan Singh Tomar, Bhind is otherwise a typical North Indian town with dusty roads, no infrastructure and plenty of buffaloes.

Foreseeing that I'd have a hard time living in Bhind, I negotiated a hotel room in Gwalior, which is 70 K.M away. It meant 3 hour taxi rides on the single-carriage highway, sometimes through treacherously thick fog.  But my comfy room at Hotel Central Park in Gwalior more than made up for it. Best decision I ever made. 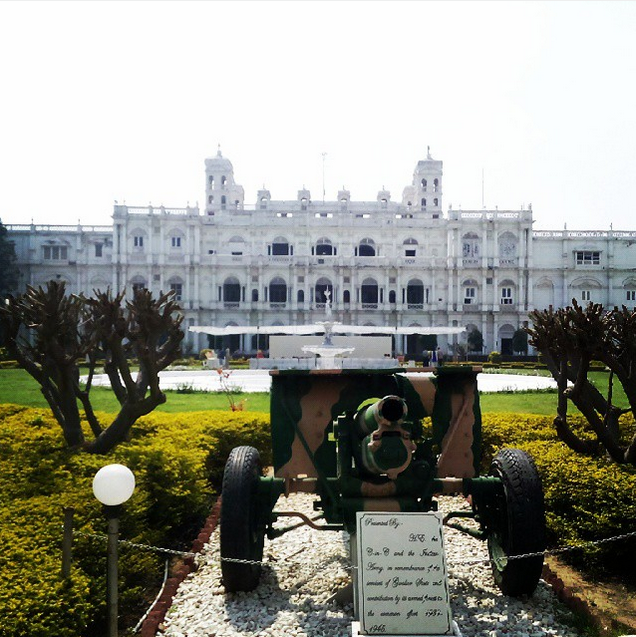 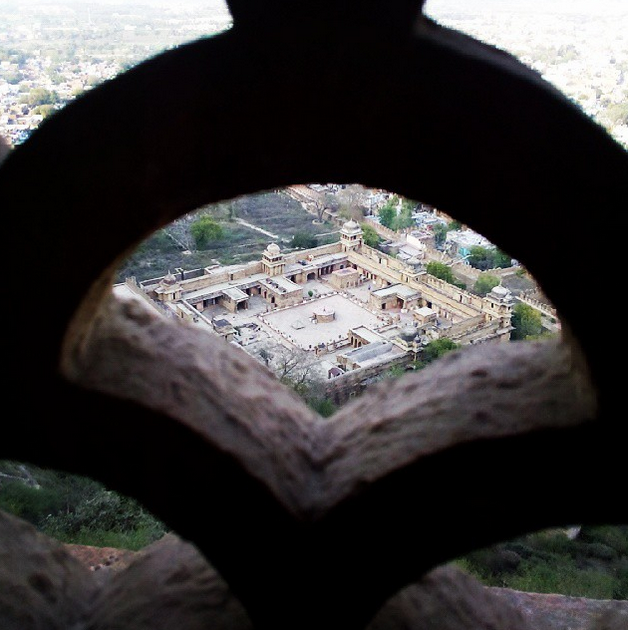 Home for the next 3 months, I took quite well to Gwalior. The city's quintessential Madhyapradeshi vibe juxtaposed with the Maratha influence of its erstwhile rulers which itself was a varnish on the multiple coats that history had painted on this medieval city. 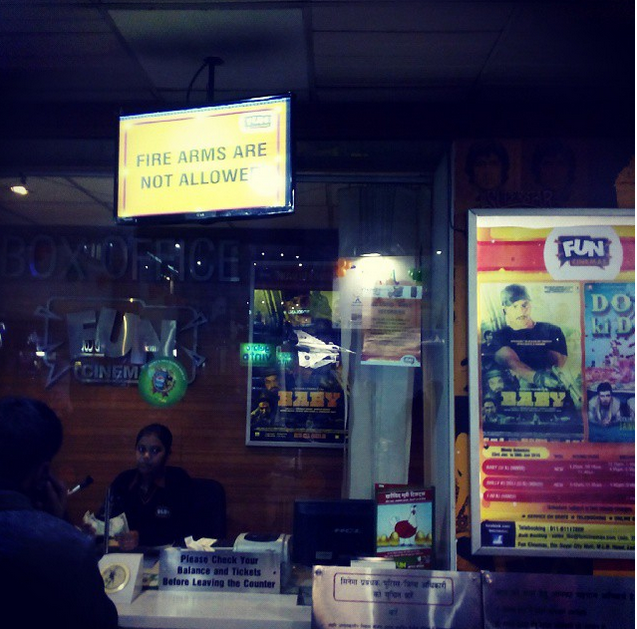 Look past intimidatingly disarming, "Firearms not allowed" signboards in multiplexes and the odd brat swagging about his revealingly tucked desi revolver, thence you will find that Gwaliorites are a generous and lovable people.

I was coalesced out for dinner (& drinks) more often than I could refuse,  graciously invited for family weddings, shown around the city like a distant cousin and even shown off an underground gun collection (it is the Chambal after all). I was generally showered with much affection by the residents of the city. The seemingly-threatening residents of Bhind and Morena were no different. From offering me their freshest buffalo milk to special lunch feasts in my honor, this nobody truly felt special in these lands.

In fact at the end of my stint, I chose to overstay for a week in Gwalior. I roamed about the now-familiar markets of Baada, walked through the majestic gardens of Moti Mahal and stuffed in as much Poha as I could, before bidding farewell.

This post is my way of giving back to the land. I will chronicle my winter out in the Chambal here, and my endeavor will be to make it the most comprehensive account of food in the region, available on the internet. I must express my gratitude to those who came here before me and helped me find my way around. Ajit Balgi's (@theindianwineman) weekend in Gwalior is a wonderful opener, capturing some of the best the city has to offer. The best way to get a hang of food in Gwalior is to check out the entertaining videos on Youtube, by Desh ka Swaad and Zaika India Ka who hop about the most famed eats in the city.

Also, special thanks to Janish, my partner in crime during the stint. My days in Gwalior were studded with our restaurant hunts and impromptu trips to Orchha and Khajuraho. Janish is the Sales Officer (aka Maai-Baap) of the LPG Territory in region. When he's not terrorizing distributors or migrained with CRM, Janish likes to enjoy a peaceful drive with good music and no phone calls.

Eating Out in Bhind
I asked my guthkha chewing driver to park our white Indigo next to the squatting Buffalo. It was my first solo visit to our distributor in Bhind. I spotted a throng of shawl-clad customers at the gate that immediately turned to me. I heard murmurs of "Saab aa gaye". Feeling rather immodest, I confidently walked in with my chest puffed. I knew nothing. I was about to be overwhelmed.

In between the angry faces, a hand reached out and tugged at my shoulder. I recognized Rahul, who beamed me a namaste and whisked me away to his cabin. Rahul is the owner of Prem Bharat Gas, a balding man in his 30s; he is proud as he is gregarious.

LPG distributors are the company's touch points for their consumers. The success of any LPG scheme pivots on the distributor. However as the distributor of a Public Sector Enterprise, these guys have a will of their own. Rahul was an interesting character, eager to appease only while being appeased. He was one of the few friends I had in Bhind.

Our meetings typically started with rants on weather and customer complaints. We then cribbed about the latest murders in the week and how this kept away industries from setting up shop in Bhind. Rahul would then tell me about his upcoming political rally and hobnobbing with the whos-who of the local power-game, as I faked admiration. In turn he would jovially agree to all my schemes for getting more customers enrolled for the  subsidy. By now he would have shouted out to his staff "Arre Saab aaye hain, kuch naashta leke aao jaldi se", and so we would always end with Kachori and Rabri. Not that it would have mattered, but my resistance melted away at the sight of those crisp plate-size Kachoris and nut-studded thick Rabri. 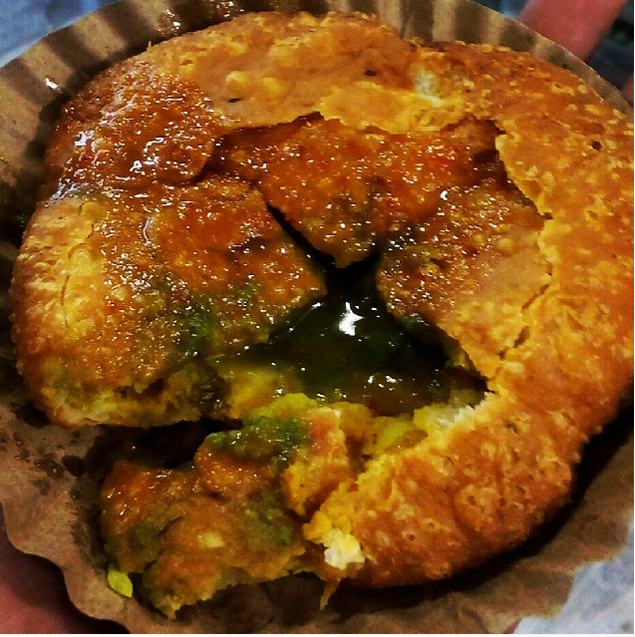 This was a Jodhpuri style Kachori. Kachoris come in as nearly many styles as Biryani, from the cracker-like Khasta Kachori I love in Daryaganj, Delhi to the Oriya/Bengali thick Kochuri filled with peas. This one was shatteringly crisp and filled with a bit of mashed potato and moong. Spanning across my quarter plate, it was surprisingly light, perhaps on account of its light filling. Unlike most Kachoris, its sole accompaniment was rather tart meethi chutney. I did not miss the Alu Sabzi as I dug a well in the crust and filled it with the chutney. The five minutes of crunching and licking that followed were always very satisfying. 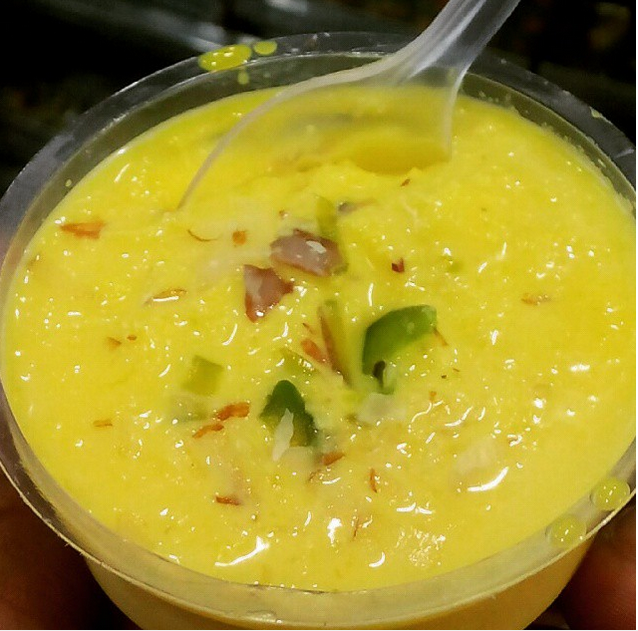 Even on days I did feel boated, more by the guilt of all those carbohydrates than the Kachori itself, not partaking in the bowl of that Kesar Rabri would be an unforgivable sin. Creamily thick with the subtle scent of saffron boiled in milk, it thankfully wasn't as cloying as Rabris usually tend to be. I later found out it is from Aggarwal Mishthaan Bhandaar on the central Parade road

The other memorable eating experience I had in Bhind was on cold, cold night. Janish, Me and my trusty assistant, Arvind had been driving around the district checking on enrollment camps and LPG godowns. We wanted to head back to Gwalior for the night, but before we knew it, thick fog descended around us and the air grew shiveringly chill. Tired and famished, we decided to camp out in Bhind that night. Arvind led us to the most 'happening' food spot in the district - Crisp Corner. I later found Crisp Corner stores and carts in Gwalior; it seems to be a local food chain.

We walked in and I saw the usual rolls and puffs on display. Unenthused, I was about to suggest that we go some place else when Arvind said "Inka Kulfi aur Masala doodh bahut achha hai Sir". As cold as it was outside, I was not going to let this pass. The old man at the counter pulled out glass bottles of Pepsi filled with their Doodh. Slowly churmed over a slow fire, with the occasional scrape of the wooden spoon to incorporate Khurchan, the sweetened milk needed little else. Arvind told me the Buffalo milk of Bhind is very good and these guys make this Doodh every day over a cow dung fire. The effort and labour shone though every drop which I savoured in my mouth. Swirling it around like a vintage Bordeaux, I let it coat my tongue and palate with a caressing creaminess as I sniffed in the subtle smokiness. We went happily to bed that nigh after a couple of pints of nourishment.

I was ready for the Chambal.

Note: This is the second in a series of posts covering my winter out in the Chambal. You can check out the first - A weekend in Khajuraho - here.

Coming up next - My Guide to Eating Out in Gwalior.