Insights into Sushi with Chef Hirotoshi Ogawa at IFCA 2015

“Press the rice as gently, as you would press your lover’s palm!” quipped Chef Hirotoshi Ogawa as he tactfully shaped a lump of vinegared rice for a Nigiri. The deft and graceful movement of his hands held me in a trance, much like the mudras of an Odissi dancer.

Chef Hirotoshi Ogawa teaches at the All Japan Sushi Association and was conducting a Sushi workshop at the International Chef's Conference, IFCA 2015.

His face shone with sweat as he surgically sliced through a hunk of tuna, with hardly a glance at it. He was streaming out every step in great detail in a flurry of Japanese, made comprehensible by his adept translator Ruchi Naithani Chinoy. The twinkle in his eyes, when he spoke about Sushi immediately reminded me of Jiro-san of the legendary 3-Michelin starred Jiro’s. I, sadly, have only laid eyes upon Jiro and his masterful creations in the Essential-watch-for-every-Sushi-lover movie, Jiro Dreams of Sushi

Right after he closed the demo by showcasing some gorgeous Sasa leaf cuttings and decorative Sushi he had prepared earlier, I trudged up to the vivacious Ruchi to enquire if the Chef could spare some time for a chat with me.

I watched as Chef Ogawa tirelessly dished out an endless stream of Nigiris and Maki Rolls to hungry delegates during the lunch break. Each Sushi was flawless and, by far the best I had ever tasted. After my 12th one, I finally got tired of eating Sushi, but the Chef continued serving till everyone had their share. I saw him mentor young Chefs and students, sportingly posing for pictures and doling out words of advice. Amazed by his energy, I wondered if I’ll ever get the chance to pick his brains.

I kept pestering Ruchi for some time and picked up some great gyaan. A gastronome herself, she gave me insights into Japanese food and culture from an Indian perspective. As an added bonus, Ruchi told me about the right way to dip a Sushi into the bowl of accompanying Soya sauce. Sideways, and the lesser condiments on it, the better if you have high quality Sushi.  Finally, Ruchi graciously managed to squeeze in a short session with Chef Ogawa, in between his interactions with the who’s-who of the Indian culinary scene.

Perched up on a Sofa in the lobby, I fired away. Ruchi, always attentive, seamlessly translated exactly what I wanted to say and added in her unique two pence as well. Here’s how our chat went.

Me: You mentioned working with fish caught off the coast of Tamil Nadu for your last Sushi workshop. How did that go? How does the local seafood compare to what you might buy from Tsukiji (the legendary Tokyo fish market)?
Chef Ogawa: It turned out pretty well actually. Some of the Tuna and Mackerel we fished out were really good. The trick is to adapt your Sushi to the properties of your produce. If you can do that, some of the local fish is very well suited for making specific kinds of Sushi. When comparing it to what I would buy from Tsukiji, there are two things to be kept in mind.
The first being the seasonal variation in temperature of Japanese waters. Back home, the water temperature varies quite a bit throughout the year leading to different varieties of seasonally available seafood. The prized Fatty Tuna for example, thrives in cold water and winter brings with it the best Tuna of the year. Therefore, my Sushi menu changes with the season to showcase what is truly at its peak at that time of the year. Indian waters, however remain almost uniformly warm throughout the year as most of India’s coast line is equatorial. The warm temperature hinders fat development in fish like Tuna, making it difficult to use local produce for some signature Sushi.
The other thing is the major difference in the way seafood is stored and handled.  Japanese fishermen take great care in flash freezing their catch immediately after retrieving it from the water. This along with strict quality standards for handling and storage ensures that only the highest quality – taste and safety wise- fish makes it to the iconic Tokyo fish market. Indian fishermen, given local cooking technique & economics, obviously don’t follow these measures. However, with the right equipment and training I don’t see why the same quality cannot be achieved here. Ruchi concurred that the freshly caught fish, used by the Chef in his last workshop here was truly comparable to the Japanese fare.

Me: In my dining experience with Sushi in India, I noted that the cuisine remains inaccessible to the general populace. Except in cities like Chennai and Gurgaon, where the local Japanese population has spawned a number of stand-alone eateries serving the cuisine, Sushi is hard to find outside Five-star properties in Indian metros. Even when it is served in these standalone restaurants, it is rather pricey, perhaps due to the imported ingredients and salaries of expat chefs. You mentioned that you are passionate about popularizing Sushi across the globe. How can we make Sushi as accessible as Pasta or Dimsums in India?
Chef: Indeed, it is true that Sushi in India is still a niche cuisine, rarely known outside circles of food connoisseurs. Part of the issue is, as we spoke about earlier, the need to import a majority of the seafood. I believe that Indian seafood can make for some great Sushi, but not the exact same thing we eat in Japan. Indian Sushi chefs need to acquire skills to get the best out of the produce available here. They might have to modify some of their technique to bring out the best from local fish. This along with well-regulated sourcing techniques will certainly bring down the need to import everything.
The other issue is the reliance on Japanese chefs. If you get a Sushi chef from Japan for your kitchen and then compensate him for the cooking and the lifestyle change in Yen, it will obviously be a very costly affair. The way forward is Indian chefs taking over the mantle. I have seen some of them in action here at Megu (The Leela) and Edo (ITC). They keep their Sushi stations in order and are quick to pick up technique. Once they hone those techniques to perfection, they can be world class Sushi chefs themselves.

Me: My last question for you. I have noticed that the same items turn up on Sushi menus everywhere in India. Almost identical arrays of Nigiris and Maki Rolls, omnipresent from Gurgaon and Mumbai to Bangalore. So, how diverse is the Sushi food culture? Also, the growing trend these days seems to be fusion cuisine, so is Sushi being played around with too, in Japan and elsewhere?
Chef: (Laughs) that is true. There is generally a standard variety of dishes in most Sushi Menus. However, the variety of Sushi you get in Japan is enormous compared to what you get here. As I mentioned earlier, some of it has to do with the seasonal produce culture. It is worth noting that the best Sushi chefs in the world are mostly in Japan. If you are eating Sushi outside, it likely not the same level of taste and quality of what you would find in Japan. This is because our best critics and connoisseurs are back home. Sushi is thriving and ever-popular in Japan, and our people keep coming back for the traditional varieties. So we really don’t see a need to do something fancy, but rather focus on maintaining the high standards we have achieved.
I have come across some fusion Sushi outside of Japan, mostly in the US. While some of it is interesting, sadly much of it is a gimmick to disguise the sub-par quality of ingredients or the amateur Sushi skills of the chef.  A reason I see most reputed Sushi joints outside Japan sticking with a limited conventional menu, is the high investment required for the imported ingredients, equipment and manpower. Rather than risking something extravagant, they treat the customer to what Sushi is expected to be. They play it safe, and serve what sells.

Me: That’s all the questions I had for you. You have been extremely kind and given me insights I couldn't possibly have come across otherwise. I am extremely grateful to you for taking out time from your marathon-like schedule for this chat. Thank you!
Chef: It was my pleasure. I am happy to note your interest in Sushi and hope you can help promote Sushi in India.

And, we end with this! 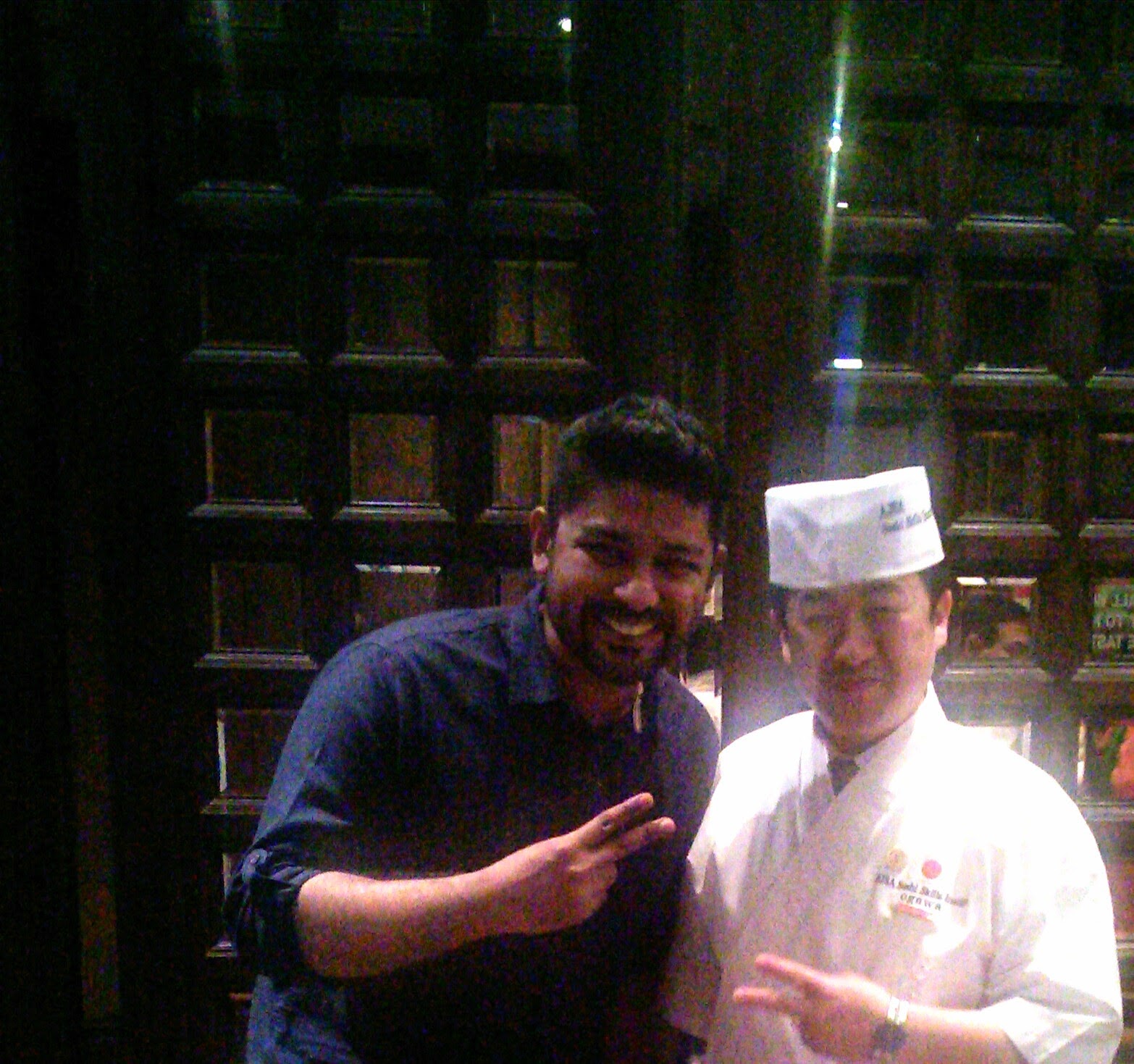