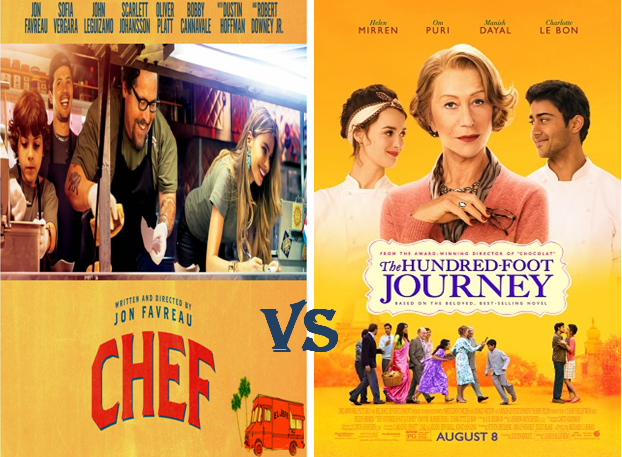 The Oscars are out for this year. Without throwing out any spoilers, I can vouch that the nominees racked your brains and harped your hearts, cementing their place as some of the best films ever made.

However, this is about the ones which were closer to your stomach! Those that left you, not confused with fuzzy endings or numb with contemplation, but an uncontrollable gluttony to rush out and grab some good food.

This is going to be a one-on-one contest.

Chef:  Imagine a big day at work - a client meeting or maybe an important presentation. You've been a great performer and want to nail this one. You're set with your masterpiece, your hard work…..your baby. Just as you're about to roll, boss walks in and bam! He quashes it. He wants you to do things his way, because that’s what we’ve always done around here.

And you do, because he is the boss.

Sounds familiar?  Chef is the story of a talented head chef who walks out on his respectable, and constricting job to strike out on his own. This is what corporate-slave dreams are made of.

Jon Favreu writes, directs and plays the titular Chef Carl Casper. This is an amicable tale of his comeback. The themes are pretty warm and upbeat.  Favreu loveably cuts through any chef-ey glamour with your-average-guy persona.

He exudes authenticity as the confused father of 10 year old Percy, played by the adorable Emjay Thompson. The father-son chemistry is subtle, yet striking as Percy plays the social-media godfather to resurrect Casper’s credibility after a scathing review by a famed food critic and subsequent twitter fiasco. Bereft of dad-time by Casper’s demanding job, Percy longs to spend time ‘doing stuff together’. Though somewhat distant, Casper admirably mentors his son old-school, like in the scene where he knights Percy with a Chef’s knife and admonishes him for serving a burnt sandwhich.


Adding some bromance is Casper's loyal sous chef Martin, played by John Lequizamo who keeps things upbeat and amusing. Star power is courtesy - Dustin Hoffman as the stuck-up restaurant owner Riva; Oliver Platt as Ramasey Michel - the feared food critic and  Robert Downey Jr. as Marvin, the ex-husband of the ex-wife who manages to be chic, sarcastic and an asshole all at the same time.

Now for the eye candy. No, I'm not talking about the plump-lipped maitre' d Molly, played by Scarlett Johansson or the unnaturally supportive latina ex-wife, Inez, played by Sofia Vergara. I am referring to the deliciously gooey cheese Cubanos, or the fall-of-the-bone pulled pork. I could only salivate and ogle as Casper gulps down slices of an overnight-smoked Texas Brisket.

Hundred Foot Journey starts out on a much more cinematic note. It demands your empathy as Juhi Chawla affectionately explains to her son Hassan Kadam (Manish Dayal), the soul of the universe is in the food she cooks. Indeed, throughout the film many of these food thoughts feel a tad other-worldly.

The restaurateur Kadam family, torn apart by political unrest and forced to flee their lives in Mumbai, crash themselves in the French countryside. Taking this to be an omen, they decide to introduce Indian cuisine to the village by opening up Maison Mumbai. Predictably, the French are taken aback by the stereotypically thrift Indian parents embarrassing their rebellious children and usurping the campagne with their masalas and loud music. The plot draws from Chocolat and the many stories of Indian emigrants trying to make it in the West.

The family is led by the brash yet affable Papa Kadam, played by Om Puri, who has unquestionable faith in the abilities of his son Hassan to bring back the Kadam glory days. Standing in his way is the curt and determined Madame Mallory, played by Helen Mirren, owner of the neighboring Michelin-starred restaurant Le Saule Pleureur - who will stop at nothing to get her 2nd star.

The duel between the two cinema stalwarts is a joy to watch as they parry blows off each other’s kitchen. Puri’s earnest bravado versus Mirren’s sophisticated pride. Their palpable chemistry through war, peace and love is the high point of the movie.

In a parallel kitchen, Hassan frolics around the countryside with Margeurite, sous chef at the Le Saule Pleureur, played by the gorgeous Charlotte Le Bon. Taking on an inverse direction, this love story turns into rivalry as Hassan turns out to be a kitchen prodigy.

Unfortunately, both Dayal and Le Bon lack the acting prowess of either Puri or Mirren. Hassan tackily toggles between lover-boy and an ambitious Chef de cuisine. Le Bon is surprisingly flat throught the transition of her love into jealousy on account of playing second fiddle to Hassan in the kitchen.

To make things worse, the viewer is subjected to far too much cloying melodrama. Like the bandaged Hassan hand-holding Madame Mallory to make a masala omlette which will decide his fate in the French culinary world. I can’t fathom why he couldn’t do it after his burns had healed?!

Lest I forget, also in the Kadam wagon are: Mansur, the conservative brother; Mahira the daughter/daughter-in-law (unclear) who shows up in lehengas; and a couple of (whose?) kids who keep running around. They seem like an afterthought, almost like the customary olives, capsicum and onions on a perfectly good Margherita Pizza. They don’t add any depth or flavor but they are there, just so that you know.

The most disappointing bit in Hundred Foot March is perhaps the food itself. Though Linus Gaarden promises much as he brings to the camera some delightful shots of whisked yolks and Masterchef-ey garnishes, it doesn’t quite evoke the carnal desires of craving like that Texas brisket. Damn, I’m drooling as I write this!

My award for best food movie of the year goes to….

By now you have figured out my pick. While Om Puri and Helen Mirren carry Hundred Foot Journey on their shoulders with charisma and charm, it is Jon Favreu who I instantly fell in love with. Chef Carl Casper is the greedy, hedonistic, fat foodie I can relate to.

From chomping down his son’s kettle corn to his Beignet foodgasm at the Cafe Du Monde in New Orleans and cooking up a comfy Fettuccini after a bad day at work, this guy loves food. The way I do.

In the end, perhaps the differences are best summed by their signature dishes, Butter-smothered-pulled-pork-loaded plancho grilled Cubanos versus the pretentiously sophisticated Pigeon Truffle.

I for one would go for the Cubanos.